Hard Truth: K-pop stans can probably do my job better than I can.

With boy group BTS bagging their fourth consecutive Billboard Top Social Artist award (among many other achievements) –  or because girl group Blackpink fans (also known as Blinks) trended the official hashtag to promote their documentary for weeks before its Netflix premiere — it’s safe to say that these fans really know how to do content marketing.

There is much to be said about those, but for now, let’s focus on these truths: 1) K-pop fans are a force to be reckoned with, and; 2) marketers should really be paying attention seeing that these groups (knowing or unknowingly) kick booty at digital and content marketing agencies everywhere.

The way ‘hallyu’ (a collective term for the Korean pop culture wave), and K-pop has swept the globe is a phenomenon that has captivated experts beyond the music and media industries.

If you ask any fan, they’ll give you a ton of reasons why K-pop is so popular: testimonials that would often hail the groups for the mesmerizing choreographies, catchy tunes, and well-trained vocal talents. But beyond the glamorous onstage performances and looking at the faces in the concert stands are, according to the idols, what really gives them their success: their dedicated fans – fans who willingly and passionately promote the works and achievements of these artists, no matter the platform.

The Powers of Fandom

Every brand wants to achieve the kind of influence that drives valuable action from your audience (especially with the Mighty Gen C being the dominant consumer audience). If you’re lucky enough, those actions would create ripples that will let you hit the jackpot.

As a brand person, you’d wonder at these K-pop stans as they achieve ripples – even waves of success for the idols they adore. Be it winning the polls for a music award, breaking internet records, or for charitable causes.

Baffling as it may seem, the admiration of fans is a reverence that should be taken more seriously. Because if you look at it beyond labels such as ‘idol worship’ or ‘fan craze’, you’ll see that they’re quite a smart horde of marketers. But what makes them the potent force that they are?

If you haven’t had much experience with K-pop, this will definitely be a question that you’ve asked yourself and has made you wonder how to achieve a similar potency as a content marketer.

Taking to Twitter, Facebook, Quora forums, YouTube, and even dedicated idol-fan platforms such as Fancafe, Weverse, and the more mainstream V LIVE, you may find the answers to those.

If you care to give reasons behind what makes K-pop stans such prolific content marketers, then read on.

1. They set goals and they achieve them.

When it comes to receiving support from fans, K-pop idol groups are often the envy of many artists. This is because apart from their own personal goals they wish to achieve, the fans of K-pop groups also set similar – sometimes, even bigger – objectives for them.

They’ll set goals for stream count for songs on Spotify; aim for thousands of downloads for a single on paid music platforms; and push the barriers of music records, whatever they may be.

Perhaps the clearest and most recent demonstration of this would be how Bangtan Sonyeondan’s (BTS) ARMY broke the YouTube record for Most Viewed Video in 24 Hours, as they breached the 100-million barrier with 101.1 million views for their hit single, ‘Dynamite’.

If you think they’re the type to pack up and call it a day after that, think again. Because avid and eager to see their beloved artists succeed, they’ll keep setting the bar higher – undeterred. As of this writing, ‘Dynamite’ has been viewed on YouTube over 608,000,000 times; a case in point is here’s a Tweet from a fan account, inviting and organizing its followers to help them hit 150,000,000 views, eons ago.

WE MADE IT ARMYS❗ NOW LET’S GO TO THE NEXT GOAL 200M🔥💪#DynamiteParty #BTS_Dynamite @BTS_twt https://t.co/HvgADUuYoH

As every idol’s comeback season comes throughout the year, we’ll see more of this kind of customary goal-setting (albeit not data-driven) to outdo their achievements. Marketers, make sure to watch closely and learn.

K-pop fans keep their eyes peeled for updates on their idols so much that to say that “following” or “subscribed” would be an understatement. In fact, fans actively seek these updates, constantly doing scan-throughs of various content and social media platforms to make sure they don’t miss a beat on any updates or trends happening in the fandom.

K-pop fans are filled with a kind of eagerness for updates that both make up the dreams of marketers and what they should also aspire to for continuous growth and keep up to speed with trends in the industries with which they and their clients involve themselves.

And by lightning-fast, we mean the second something from the group drops, you’ll see a hundred different gifs, memes, video clips, and what have you, soon after. Plus, their speedy work is quality, too. 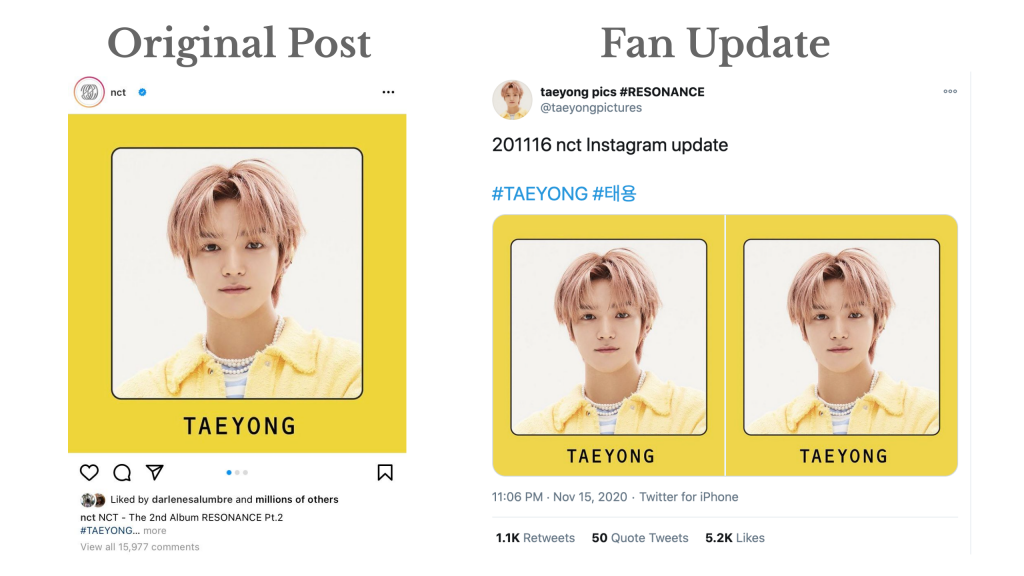 Pretty sure the time difference between the original Instagram post on NCT’s Taeyong and this tweet duplicating it was only a few seconds, but we may never know now just how fast it happens, exactly.

4. They understand the value of engagement.

As content marketers, you know that engagement is a metric that holds a lot of water and leads to more valuable and tangible results, business-wise.

In a K-pop fandom, it’s no different. Since awarding bodies in Korea and in the US began honoring artists for impactful social media presence, fans have understood that a ‘Like’, ‘Retweet’, or comment packs a powerful punch, in terms of fueling the success of their favorite stars.

Take Billboard’s Social Top 50, for example, where 8 out of the Top 10 are Kpop groups and artists:

To be part of Billboard’s coveted Top Social 50, fans have to continuously Retweet artist updates, mention the artist’s Twitter handle, reply to their tweets, and just overall be active in spreading the word about the group. Talk about never-ending buzz and promotion!

5. Their engagement translates into real-world action.

As if it wasn’t enough to say that K-pop fans are masters of community management online, it even spills over offline and compels real-world action from audiences.

While on-ground mobilization for social justice is yet to be seen from fans of other K-pop idol groups, it’s not uncommon with BTS’s ARMY. Having witnessed their idols assert on many occasions that they value the importance of giving back, ARMYs have learned to use their voices and influence for such same purpose.

Congratulations, ARMY! As of today, you have already donated a total of 7.7 tonnes of rice, vegetables, and seeds worth Php445,649.10 for the typhoon victims in the Philippines

Your support has opened up more opportunities to further help people. Thank you for your hard work! 💜 https://t.co/cNkHwp5NN4 pic.twitter.com/BqnTSFjhkE

During the most pressing times – and in places not too far from home – ARMYs had called for and organized collective efforts for funding and donating to hard-hit areas, whether by a typhoon or by socio-economic crises. ARMY Bayanihan is one of the many fandom accounts on Twitter that did so, in support of both farmers pressed for income and communities who lost their homes to Typhoons Ulysses and Rolly.

And they’re not done yet.

This isn’t even half of the whole story. As the K-pop industry and its horde of active online audiences continue to mature, you can expect their skill sets to lengthen and deepen. One takeaway you can leave with for sure is this: hallyu is creating massive waves and, with its force and momentum, it’s about time to seriously consider thinking about how this can affect (and even shift) the digital marketing trends and even practices.

After all, a lot of the changes that have happened in the history of mankind were influenced by what K-pop essentially is: music, or in this case, it’s content, that is meaningful and impactful. Who’s to say that the digital world isn’t, as we know it today, already being reformed in some way by these fandom behaviors?

Do you stan a K-pop group and want to share your own thoughts on their digital marketing technique? Share it in the comments below or better yet, talk to us over at Facebook, Twitter, or LinkedIn. We’d be glad to hear what you have to say!

Thank you. You’ve written this factually 💜 I purple you for this. It’s not always that Kpop fans & ARMYs are regarded in a positive manner you know. But I’m hoping a lot of people will read this article (esp non kpop & not BTS fans) and maybe in some ways, will give them at least a fraction of understanding about us, fans Good job! 👍

Thank you, Che! And yes, I agree. While ARMY is one of the most active fanbases online, fans of other artists also deserve representation and appreciation for all their work as well. We’re waiting to see how hallyu will further sweep the globe. Congratulations on the recent awards nomination for BTS!

Thank you for this, I purple you. I hope many people will read this and become an eye-opener for them that K-pop stans are not here to just be delusional and craze over the K-pop groups that they stan. Good Job!

K-Pop has become well known all over the world. It is admirable for a small country to establish such a music industry and introduce its name to the world.