4 SEO and SEM Differences for B2B and B2C Ecommerce Sites 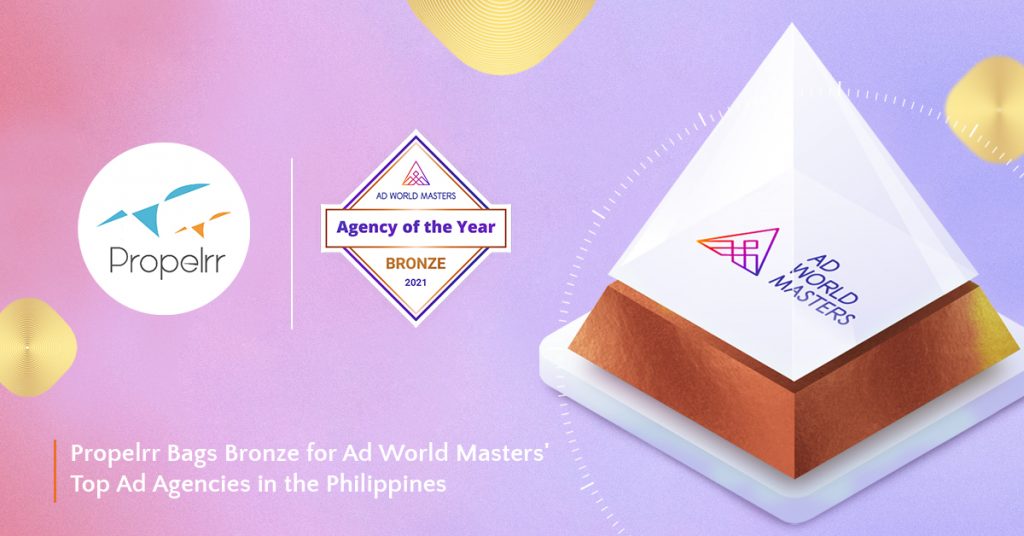 MANILA, Philippines – Propelrr is among the winners of Ad World Masters’ Agency of the Year – Top Ad Agencies in the Philippines for 2021.

Last Tuesday, January 18, Ad World Masters released its list of winners of the Agency of the Year for 2021. Among the winners of Top Ad Agencies in the Philippines is Propelrr; tied at seventh with another agency.

Both earned scores of 8.5, each garnering a bronze for their work in digital advertising in the country. This is the first award for Propelrr in 2022 – adding yet another win under its belt.

For this year, Ad World Masters assessed and ranked the over 11,900 agencies across 78 countries presently existing in their database.

This year’s bronze for Propelrr is the second consecutive award for the agency, which previously won it for the same category in 2020; further asserting its expertise in digital marketing on a glocal scale.

Propelrr was also credited in DMCI Homes’ win for the 2019 Gold Stevie Award for Innovation in Business Information or Application Websites. This was awarded to the triple A developer for the significant innovations done on their website and mobile application. An award earned because of efforts grounded on data and expertise in experimentation.

This year, Propelrr looks forward to earning more awards for how it continues to build upon existing digital marketing practices. In this effort, it seeks to demonstrate the prowess of Filipinos in the global playing field of digital marketing.

To help advertising agencies improve discoverability, Ad World Masters assesses them for “relative potential”. Relative potential is represented by its Agency Score. This score is released annually, after a year-long assessment period that closes at December 31 every year.

As stated on their webste, this figure is representative of an agency’s current performance and experience, but also “comparative performances”. This helps clients identify an agency partner based on how good they can be compared to their comeptitors.

Assessment is based on both crowdsourced raw and verified data that is computed by artificial intelligence (AI) technology. Below are the criteria and key concepts on how the AI assessment is carried out:

The AI then takes these data points and computes the Agency Score accordingly.

Searchers who also want to look beyond the score can view details about a featured agency in dedicated pages. These pages contain information such as latest projects, latest tweets, clients they’ve served, and much more.

You can see how this page looks like by viewing Propelrr’s agency profile on Ad World Masters.

To get the latest updates about the company, make sure to subscribe to the Propelrr newsletter.